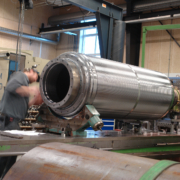 Many customers make high demands on RIVAL’s ability to manage critical and costly components. One of these customers is Munck Cranes, who started a working relationship with RIVAL last spring.

High demands
The manager from the Norwegian company Munck Cranes made high demands when they were in the market trying to find a sub-supplier, who could process wire drums to the company’s cranes. The demands were not only on quality, but also on delivery ability, documentation and price.

The wire drums are critical and costly components, for which reason no failures were allowed. Munck Cranes chose RIVAL’s, who obtained raw material in record time and processed 14 wire drums in different sizes to the Norwegian giant cranes. The collaboration went well. “We are very pleased with the effort and the result. There is no doubt that we will use RIVAL again,” says senior buyer Odd H. Olsen from Munck Cranes, who employs 185 men in Scandinavia.

A competitive price
Hiring a sub-supplier to produce the wire drums was a late decision. Munck Cranes’ own production was out of operation, for which reason the company put high demands on the sub-supplier’s ability to deliver on time.

“We chose RIVAL for the job, because we believed in the company’s ability to lift the job quality-wise and getting it delivered at the agreed time to a competitive price,” says Odd H. Olsen.

Despite the distance between Norway and Denmark, RIVAL was good at communicating and giving feedback on the job. “They were very accommodating and quick at reporting back to us. Also, they contacted us if they were in doubt about something,” Odd H. Olsen says. 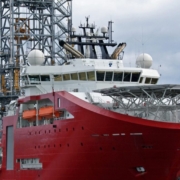 The Norwegian engine supplier Wartsila increasingly demand RIVAL’s skills in machining operations. This is primarily due to the creativity, skills and efficiency of RIVAL’s staff. A supply ship runs into a pier and has to dock at the Polish port of Szczecin.

Norway is notified and Wartsila’s office has to locate a new spare part as quickly as possible. Shortly after, an e-mail arrives in Benny Soerensen’s inbox at RIVAL with an order for a piston rod. “It had to be done in no time. It costs a lot of money to have a supply ship lying idle. At the same time as they sent the e-mail with the drawings, they shipped the raw material from Norway.
We received that on Tuesday,” says Mr Soerensen, who is the sales manager at RIVAL with responsibility for “difficult” tasks. Staff at RIVAL completed the job in 72 hours. On Friday morning, a special transport service could ship the spare part to Poland, where it was fitted to allow the ship back at sea.

Competitive Denmark
RIVAL is well on the way to conquer the Norwegian offshore market, which is short of companies offering machining operations. Danish companies are known for being flexible and innovative. The relocation of many manufacturing operations to countries with lower costs has forced Danish companies to do things differently.

“Our employees are very conscious of looking for the easiest way to solve a task. This allows us to compete on both time and price.
We have been forced to hange the way we operate because demand has changed. We tell our staff that it is all about the end – not the means – and that we count on our people to achieve the optimum result,” says Mr Soerensen, who has often experienced that Norwegian companies send the special material required for the manufacture of specific items to Denmark, whereupon RIVAL manufactures the item and returns it.

The shipping costs are high, but it shows how great the eed is. “In future, we will probably consider stocking the special stainless steel materials for the offshore industry so we can become even more competitive.”