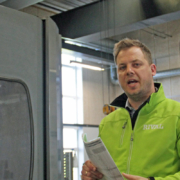 RIVAL has for several years had long-term framework agreements worth millions with Svendborg Brakes. It takes control of documentation and quality, which RIVAL can honor.

Supply Chain Supervisor John Helskov Hansen from Svendborg Brakes has known RIVAL for many years, and the company was one of the first that appeared on the retina when Svendborg Brakes had to find a new partner for long-term agreements on the production of particular Brake houses and brake calipers.

Control of the quality
Svendborg Brakes manufactures brake systems for wind, offshore, crane and mining industry. “For us it is crucial that there is control of the quality of the items we receive from our suppliers, since it also has great significance for our customers,” said John Helskov Hansen. “Here we have really good experience with RIVAL. Over the past few years we have been produced many topics with them, there has actually been something to postpone the quality. It is also our experience that the overall economy is sensible. The price will always be up for discussion, but we have a feeling that we get a really good value for money. ”

Cost Optimal production
Svendborg Brakes has concluded several framework agreements with RIVAL on the production of brake houses and brake calipers. “Prior to the agreements we have made several test series and has focused on documentation, certificates and measurement reports,” says sales manager Christian Aarup from RIVAL. “It is important for both the customer and us that all the preconditions are in place before we start the large serial productions. It provides the most secure quality and cost optimal production for the benefit of both parties.”

Development of new surface
As a part of the collaboration, RIVAL has also been a sparring partner for Svendborg Brakes concerning the choice of a new surface for a stamp. “It is a great advantage for us that RIVAL also have the skills to be part of such a development,” says John Helskov Hansen. “In this way we can collect both development and production in one place, which facilitates the whole process for us.”

The RIVAL package
“In a task like this, we also focus on offering the customer the relevant parts of The RIVAL package,” says Christian Aarup. “We have in this case been very aware of that we add the customer the greatest value by thinking development, documentation, quality, delivery performance and price together into a package that exactly fits Svendborg Brakes.”

Continued cooperation
The incoming framework agreements between Svendborg Brakes and RIVAL runs according to plan. “When the agreements expire, we take them always under review, as our needs may have changed, and for example, be produced completely different topics,” says John Helskov Hansen. “However, I am convinced that we will continue to enter into agreements with RIVAL. We are very satisfied with their skills and the quality they provide. It is also a big plus that we know each other well and can always talk to us rightly about things. ” 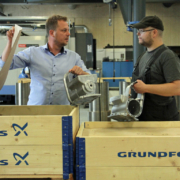 The employees of RIVAL have worked closely together with Grundfos’ technology centre for a long period of time. The work concerns development and product maturing of a new pump house, which is going to be produced in Grundfos’ factory in Serbia and sold globally, particularly in USA. RIVAL has the responsibility for educating staff in Serbia and implementing the production. “We have decided to collaborate with RIVAL about this task because the company possess certain competencies, which we don’t do ourselves at Grundfos,” says technology expert Erik Jæger Thomsen from Grundfos.

“We have built a very close partnership in which both parts have listened to and learned from each other, which has been very valuable for the result.”

Complete trust
Grundfos trusted RIVAL during the working process and has known for certain that the job would be solved. “We knew from the start that RIVAL was in possession of the competencies, which we were looking for,” says Erik Jæger Thomsen.

“Their processing experience combined with their desire to enter into a joined development project are very unique factors. The foreman Glenn Scharling, in particular, has offered alternative ways to handle things, which has been valuable for the process. Glenn says things straight, which works very well in the daily collaboration.”

Furthermore, RIVAL generally works with the same programs and measuring equipment (the Zeiss measurement machine) as they do at Grundfos, which makes it easier to transfer things between the two companies. i

Passing on knowledge and competencies
RIVAL has the full responsibility for introducing the machines, tools and programmes, which will be used in the Serbian production. During the process, the Serbs, who will be in charge of the pump production, have payed RIVAL a visit.

RIVAL’s employees have passed on knowledge to the Serbian staff. “In Serbia they are rather green in terms of this kind of production. Therefore, the knowledge transfer from employee to employee is important for their future work,” says Erik.

RIVAL’s staff participates at the actual introduction of the machines and production in Serbia. In September, the machine worker Frederik Petersen and either Glenn or sales director Christian Aarup travel to the factory outside Beograd and they stay for a couple of weeks.

Great satisfaction
“In every sense, we are very happy about the collaboration with RIVAL regarding this job. The company has been the partner and competency supplier, which we were looking for. In many ways, it has felt like, we have been a part of the same company,” says Erik. “The fact that RIVAL does not compromise on quality has been very important to us. We will definitely benefit from continuing the partnership with RIVAL in the future.” 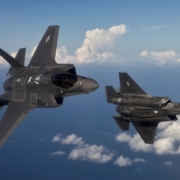 RIVAL’s two YCM machining centres operate with extreme precision, even with narrow tolerances. RIVAL’s high reliability of delivery and sound employee competencies were crucial factors that led to RIVAL being selected as the supplier of machined sub-components for the large fuel pots, which are fitted under the F-35 fighter jet.

RIVAL’s YCM machining centres are perfect for the processing of extremely important components, for example, sub-components for fuel pots for jet fighters. “It’s crucial here for the customer that mistakes are not made. Therefore, both we and the customer place a great deal of importance on the machining being executed with great precision, because if the equipment has a defect it can have fatal onsequences,” says RIVAL Sales Manager, Christian Aarup.

Good lead time
“On this order, which is worth millions, our new machining centres operated unmanned for longer periods, which meant good lead time and utilisation of capacity, says Christian Aarup. “It’s a great advantage for the customer and us, that thorough preparatory work with the correct drawings, software and transfer of data, high-end machines and competent employees, which can make the whole thing run smoothly, can result in a machining process that operates painlessly.”

Gibbs 3D CAM minimizes the risk of errors
To minimise the risk of errors, the people at RIVAL use Gibbs 3D CAM software, which can automatically transfer machining data for a specific component directly to the machine where the machining shall take place. “Our customer has provided us with sound data on the components we shall produce,” says Christian Aarup. “We’ve programmed on the basis of that, so the machining is as precise as the customer’s engineers stated it. Now and then we’ll discuss specific changes to the drawings with the customer, if in our experience, we can see that it can be done better. But in general, we operate precisely in accordance with the customer’s instructions.”

Reliable machining for all industries
“Our new YCM machining centre is perfect for machining critical and expensive components for all types of industry, where the requirements for precision are crucial,” says Christian Aarup. “We’ve developed our high-end capacity, which means from now on we can machine several components with extreme precision – at high speed and still with high quality – which is what our primary segments increasingly ask for.” 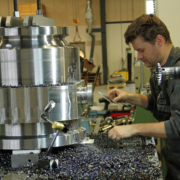 The typical urgent job involves spare parts for tug boats or supply ships servicing the oil rigs. However, RIVAL also supplies spare parts to be stored by companies like Vetco Gray, who orders bushings for oil equipment used in the North Sea.

“In this case, we are always ahead with production so they can order parts for their warehouse in Esbjerg on an ongoing basis. Vetco Gray is part of the global GE Oil & Gas.

We have supplied GE with the requested documentation relating to our quality assurance, reliability of supply, environment, internal communication, health and safety work, procedures and ethics.

As a result, we can now be more flexible, expand the collaboration on an ongoing basis and supply more demanding components. We expect to be included in the shared database for all GE Oil & Gas units,” says Mr Sorensen.